I’ve been meaning to test and compare my stoves for some time now. It’s all good and simple when it’s warm. But how will they perform in sub-zero temperatures? Let’s find out.

All the stoves are very inexpensive ranging from  3 to about 8 British pounds ($4.5 to $12). They are so cheap it’s hard to tell who made them. So let’s just say it was someone in China.

The test was very simple. Three different stoves were left outside in -5˚C for approximately half an hour to have them and their fuel cooled down and make a fair comparison and realistically emulate a winter camping trip. Water received the same treatment before each test. Every stove was used in exactly the same way with a wind screen, and was to boil 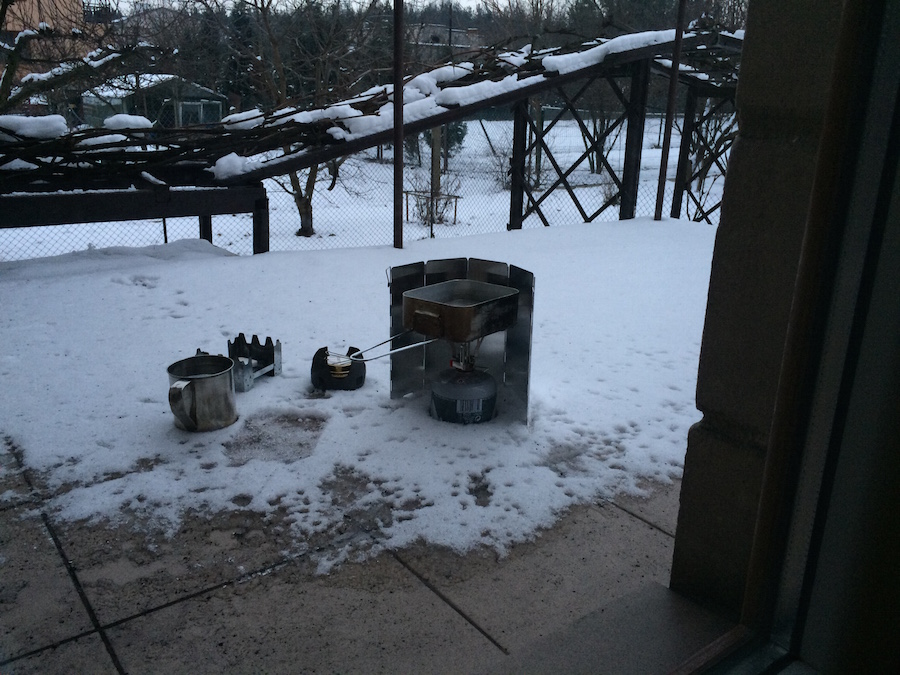 500 ml of water kept each time in the same container.

First, I brought out my cheap gas stove with a Coleman 250 cartridge. It’s a nice little thing with its own piezo-electic starter and a pretty little box. It has four collapsable arms, which after folding down make it fit in the box, which, in turn, could easily fit a cargo pocket. 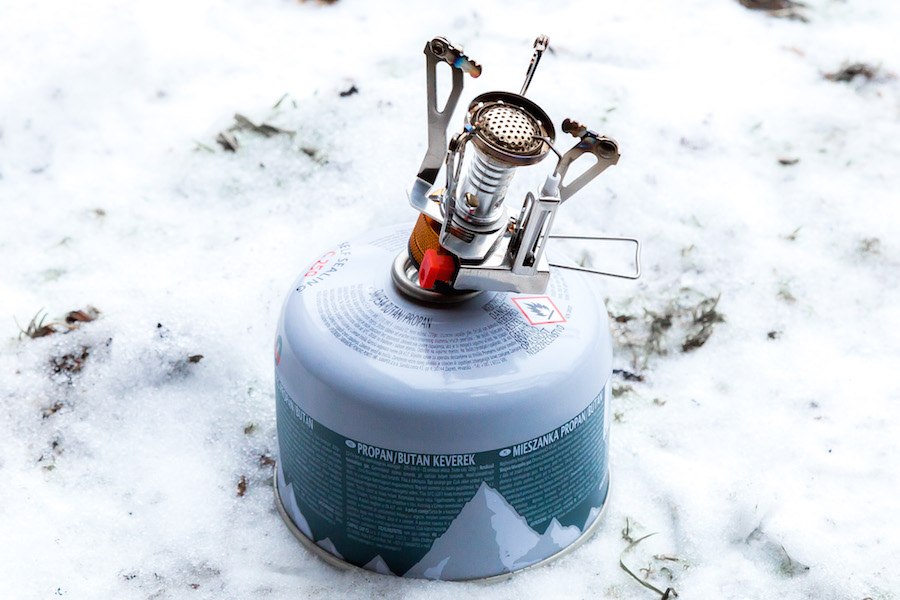 It doesn’t seem to have any plastic parts, apart from a rubber washer, which tends to cause problems when overheated. The built-in ignition works every time in both stoves (yes, I have two of them :)). The thing is a little jet flame when cranked up to its full potential.

Unfortunately, I made a mistake when testing it and realised that a bit too late to fix it. I thought the stove was burning with full power, where in fact there was still some extra juice left in this little monster. As a result the time it took to boil 0.5 l of water wasn’t that impressive – about 15 minutes. I’m sure it could be done in close to 10 minutes though. Nevertheless, it is still a good result considering the temperature and strong wind, which at times wanted to blow the screen away.

I should also add, that this stove emits almost no scent. It does, however, make a lot of hissing noise. Especially when running on full power.

Next in line was my alcohol stove. It’s a handy and light-weight stove with a simple flame adjustment mechanism seen in the picture. I bent the corners of the stand inward so that it would support smaller pots and cups. 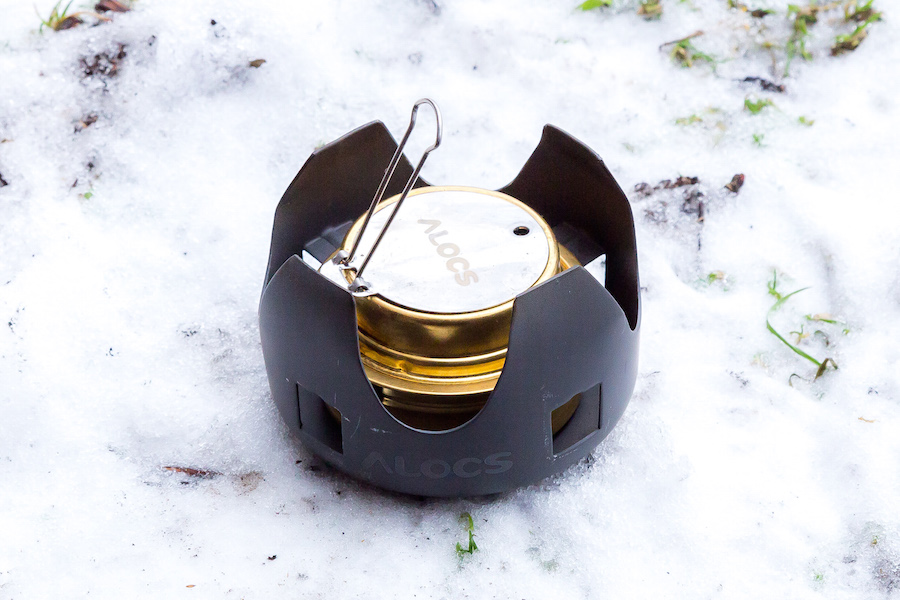 The stove worked relatively well in summer boiling half a litre of water in about 10 to 15 minutes when tested in the woods. To be honest I expected it to work much better than the gas stove in low temperatures. The good news is, the amount of alcohol I managed to pour in lasted almost an hour, which is quite impressive. Unfortunately, it wasn’t long enough to boil 0.5 l of water. Something just wasn’t right. I tried lifting the pot and noticed the water started whirring almost immediately whet it was roughly 6 cm higher than the original stand’s height and stopped as soon as I put it back down. I couldn’t repeat the whole test but I could test it again in different conditions. For that, I made a new, higher stand cut out of an old tin can. I timed the stove again using the same amount of water in 17˚C indoors. 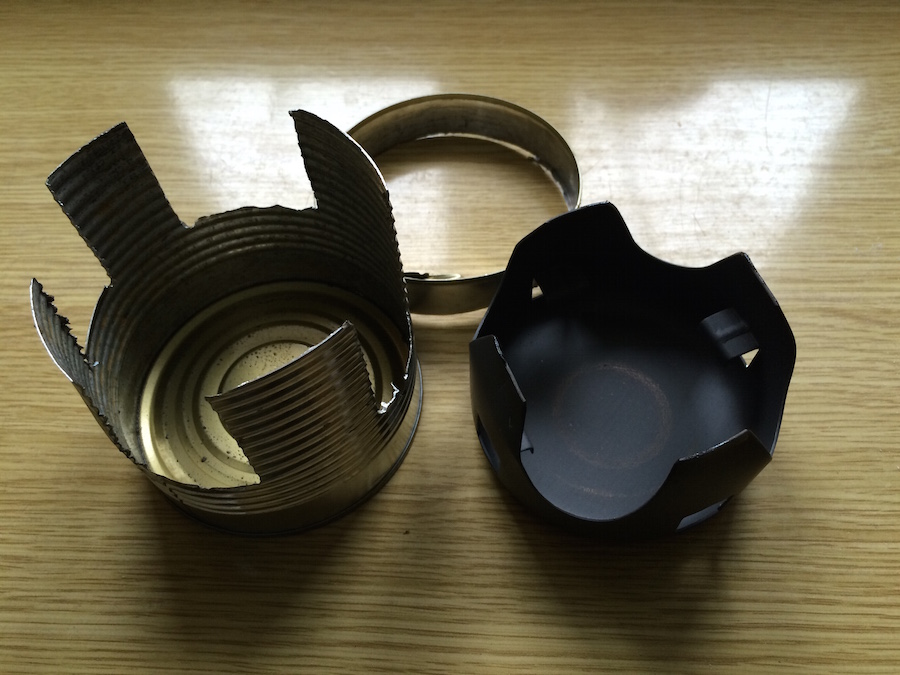 The original stove brought the water to boiling in 22 minutes. Twenty two minutes! That’s just ridiculous. My new, quickly crafted makeshift stand reduced the time to 11 minutes. Now, that’s more like it. So pretty as it is, this stove-stand combo cannot be left unmodified if it’s going to be efficient. I wonder how long it would take to boil that water in lower temperature on a windy day. I’ll test it some other time but it seems rather unsuitable for winter camping in any case. 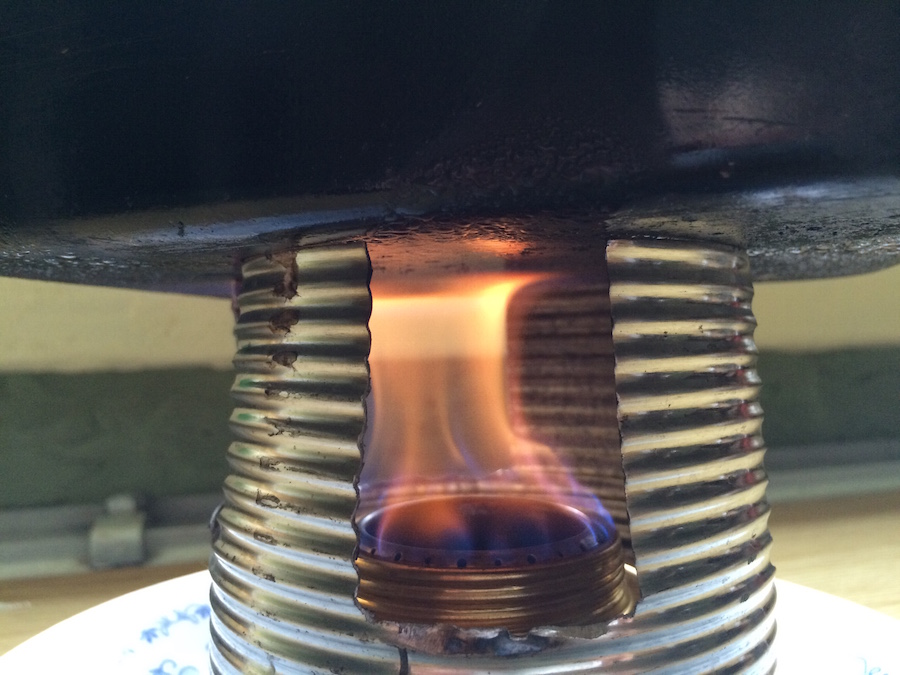 If you are, however, going to camp in spring, summer or even autumn, this stove may not be such a bad idea. Sometimes you’re simply not allowed to bring and use your gas stove. On top of that, alcohol is readily available in most supermarkets and hardware stores, and isn’t that expensive. In fact you can get good two, three, maybe even more, hours of burn time out of a £2 bottle of denatured alcohol.

The downside is its strong smell. Seriously. It stinks even when burning outdoors. Doesn’t make any noise, like the gas stove does, but the smell can be almost unbearable, especially when you have to sit next to it while stirring your meal. 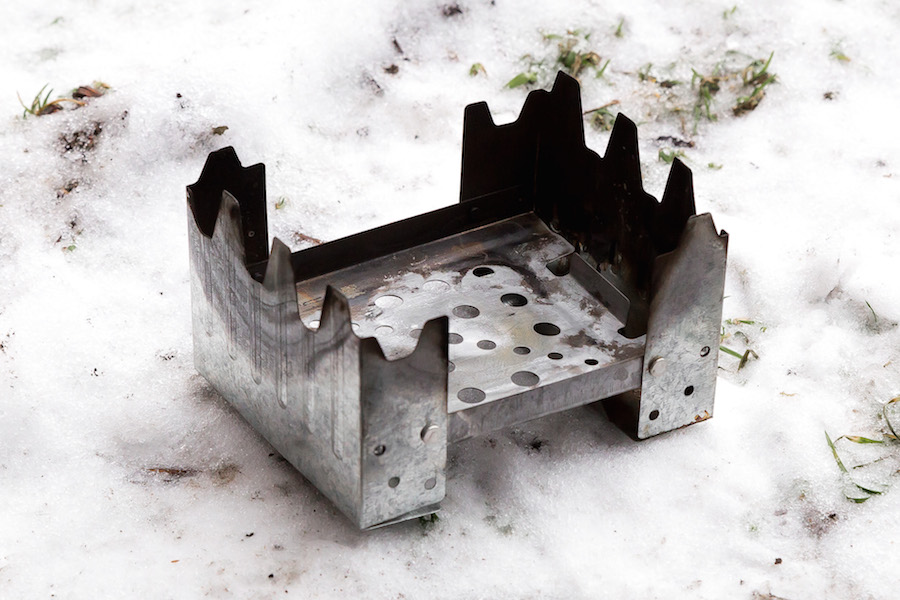 The esbit or hexamine stove was tested using its intended fuel – hexamine – as well as an alternative one – wood. The first fuel seemed to have some serious potential as it almost boiled the water in just 7 minutes. Almost. Unfortunately, one large cube and three small tablets weighing together 53 grams were not enough and the fuel burned out before boiling the water properly. I suspect that 2 large cubes of hexamine (30 g each) would boil the water in a record breaking time, beating even my gas stove. But the test exposed some flaws of this stove-fuel combination.

First of all, there is no telling how much fuel you’ll need to add in a given temperature to cook your meal or boil your water without running out of fuel before you’re done, as this is likely to change dramatically depending on weather conditions. Last time I tested this combo, it only took one large tablet to boil the same amount of water in 10˚C. If you add too little, it won’t work. Add too much, and you won’t be able to just switch it off and save the rest for later like you would with the other stoves. Not to mention there is little or no flame adjustment, which makes cooking somewhat challenging.

The good thing is, this stuff doesn’t smell or make noise. But you can forget about getting the fuel in a local shop. Plus esbit is quite pricey and can take up a lot of space if you’re planning a longer outing.

But this stove has an Ace up it’s sleeve. If you happen to run out of esbit, it will take virtually anything you can find and burn. Candles, cotton wool with vaseline, wood, dry grass, bracken… You name it. It’s far from being scentless or maintenance free at this point, but hey. Who cares. At least it’s free. The stove works very well with wood. In fact, the vent holes and the uplifted bottom seem to allow free oxygen flow and make it work a bit like a wood-gas stove creating a strong jet-flame.

It almost boiled the water in 11 minutes but ran out of fuel. Feeding it and rega 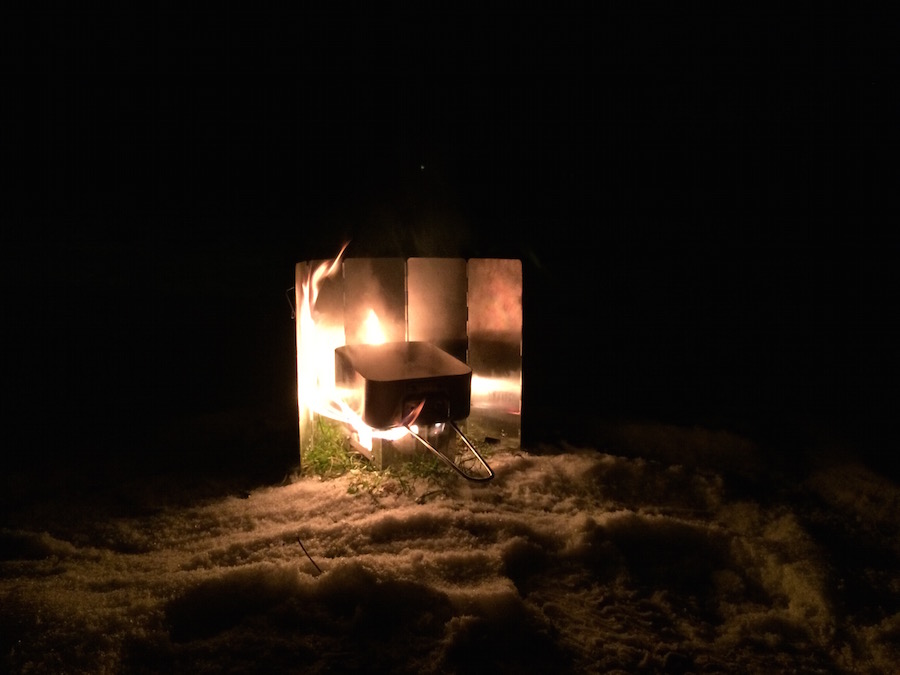 ining its strength, took extra few minutes and the water was boiling after about 19 minutes. Despite that, I think this stove has a potential. If you keep feeding it steadily, it can be quite effective. It can utilise pretty much every type of fuel including wooden sticks or dry weeds, which are free. On top of that, it produces so much heat, you can actually warm up by its flames much like by a small fire.

If this was a simple ‘user friendly’ contest I would have to give it to the gas stove. Even though it’s probably not the fastest, cheapest or most versatile one.

It’s relatively lightweight compared to the competitors with similar amount of fuel. According to a test I saw on a website, which I can’t find anymore, a 250 Coleman cartridge will last over 2 hours on full power. This combo weighs about 350 g. To get the same burn time out of the alcohol stove, you’ll have to take about 300 ml of alcohol. With the bottle and the stove itself it’ll weigh about 370 g. However, the gas stove will allow you to boil much more water in the same time. The esbit stove with it’s fuel (12 large cubes) will weigh approximately 460 g. However, although this fuel will also last about two hours, it will most likely boil much more water than the gas stove within that time. And frankly, if it was all about how fast you can boil 0.5 l of water, this would probably be the winner. The gas stove is, however, by far the most maintenance free and user friendly of all the tested methods of camp cooking and boiling.

The esbit stove is the most versatile allowing for virtually free fuel to be used. It also seems to have the potential to boil water in a record breaking time, even in sub-zero temperatures, and produces so much heat it can be used to dry clothes or simply keep you warm on a cold day with a minimal amount of free fuel. The problem is its complete lack of flame control and its constant need for attention – preparing and adding fuel.

The alcohol stove turned out to be a bit of a disappointment. It has rather pour fuel efficiency, even with the improved stand, and smells really bad. On the other hand, it offers a decent flame control, uses cheap readily available fuel, isn’t noisy like the gas stove and doesn’t need as much attention as the esbit stove regardless of type of fuel used. Despite that, I thing it would be my last choice for winter camping.