The research is carried out in collaboration with a Southampton Solent University PhD student David Oakley.  It is a part of and contributes to the PhD project. However, it is conducted mostly independently yet using the same methodology in order to make the results useful for both projects.

The preliminary research began on 7th of December in Woods Mill Nature Reserve managed by Sussex Wildlife Trust. Its aim was to test and compare different methods of detection such as hair and footprint collection. Similar non-invasive methods have been evaluated and considered efficient and cost-effective in previous studies on small carnivores (Belant 2003; Gompper et al. 2006; Garcia and Mateos 2009). However, results may depend on the species surveyed, time and the area of research (Gompper et al. 2006; Hellsdtedt et al. 2006). Some authors point out that, although the available techniques are effective, they need to be improved to increase probability of detection (Garcia and Mateos 2009).

The preparatory survey was continued in Poland from 23rd to 28th of December in order to evaluate and compare potential study sites, inform the local forest managers about the survey and solve the problem with bait, which emerged earlier in Woods Mill. Steel feeders used in Poland and shown below, eliminated the problem caused by mice and rats, which often eat bait before a target animal has a chance to detect it. 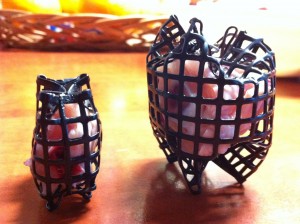 issued and the final methodology established. Data will be collected from several, randomly selected grids. In each grid one or more tunnels will be placed and checked for activity every day. In total there should be between 60 to 100 tunnels in each study site. The grids will be selected from areas encompassing different habitats such as thickets, woodlands and meadows, which is to enable detection of potential differences in habitat preferences between English and Polish populations.

2 thoughts on “My MRes Project”