Seems like winter is finally giving up, but just a week ago my garden was full of snow and hungry birds. In fact, deep snow is still lingering in the forest. Because of that, I haven’t been able to begin collecting data for my project. On the other hand, I’ve had some time to hike and test my new camera traps. I can’t set them up in the woods yet, as they would be an easy picking for whoever decides to follow my tracks in the snow. But since my garden is also full of life, it seemed like a perfect place to try the new equipment. 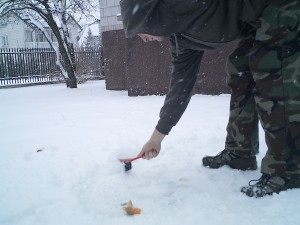 First impression? Small birds generally don’t set them off. That may be a bit problematic since a weasel is not much bigger than a fieldfare, and I’m supposed to try and record their activity around my tunnels using the same camera traps. I do remember, however, that camera traps I used before (same brand, older model) managed to capture rabbits and rats. So, maybe it’s just the birds? Maybe they’re too well insulated for the infrared sensor to pick up their presence? I hope so and, I also hope that weasels will give off more heat. Either way, a flock of starlings does set off the cameras and I assume that lots of motion should do the trick.

Due to the prolonged winter birds were happy to cooperate and I was able to use ‘field scan’ mode to make sure the cameras would turn on every 5 minutes regardless of their heat and motion sensors. The disadvantage of this method is having to go through tons of useless video material. Nevertheless, I managed to capture some interesting battles between smart starlings,  crude fieldfares and aggressive waxwings. 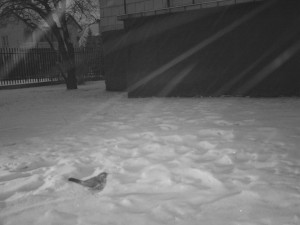 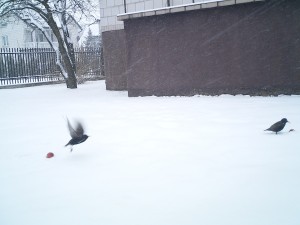 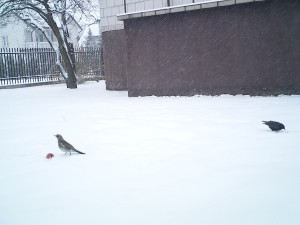 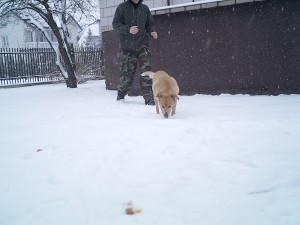 A confused blackcap would occasionally show up among those fighting ‘giants’, but despite its size, it wasn’t gonna give up on apples without a fight. I honestly think it was the most feared and respected bird in the garden. Well, I guess if I were a tiny insect eater, who just found his summer cottage in snow and faces starvation, I’d be a beast too.