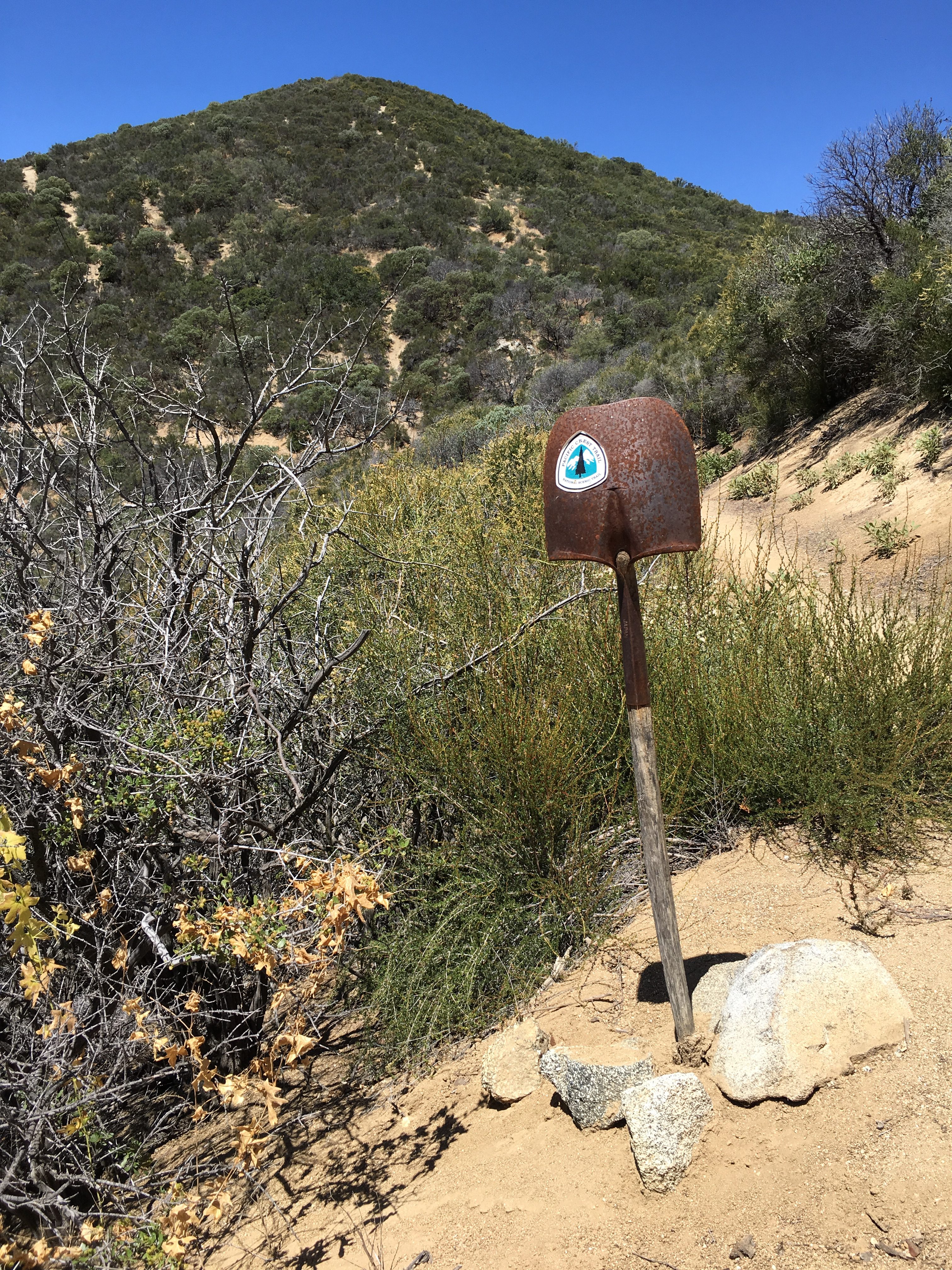 Ok, so first of all I need to apologize for any errors and unusual formating you may see on your computers. This is my first entry using my phone and it is extremely dificult and frustrating to do it that way. I have absolutely no idea how this will show on a proper computer screen. On top of that, there’s things happening here that I seem to have no control over. Never mind… 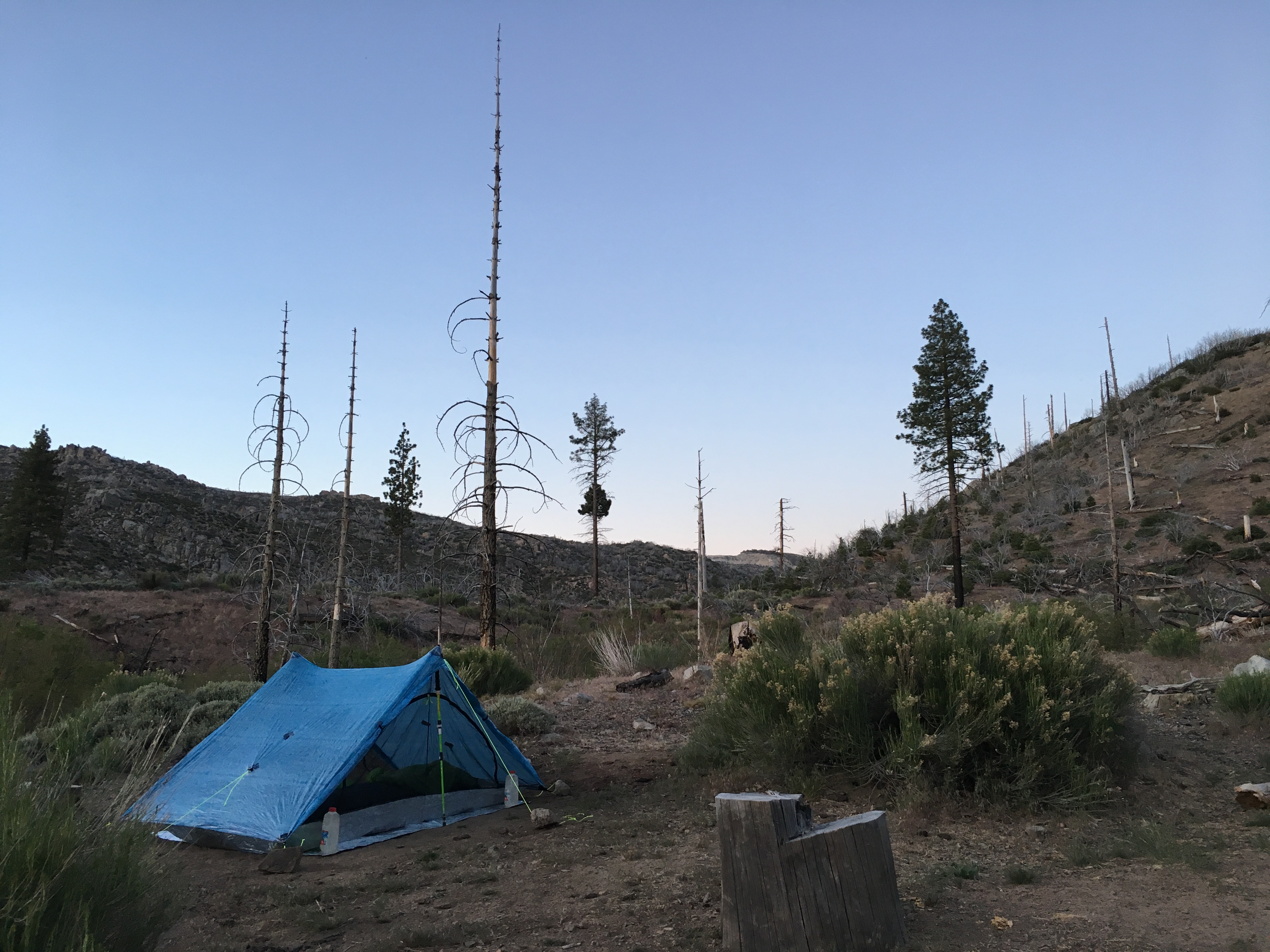 So I’ve been hiking the Pacific Crest Trail (click the link if you don’t know what PCT is) for a month now and I finaly found some time to post something. Well, or at least try. We’ll see how that battle with this heartless little device goes.

I thought the first entry should be about something important. And the most important things out here, after water and food, are your feet. If they fail, you’re grounded. And that can be a major issue considering that much of the trail is hardly accessible by anything other than foot or helicopter.

Since I’d never had too much trouble with blisters while hiking and my shoes seemed well tested, I didn’t really think about this too much and went a little underprepared when it comes to blister prevention and treatement. And that’s exactly when the burning bastards started to pop up. Totally unexpectedly.

My biggest mistake was to try and keep up with the schedule I came up with while sitting on the couch. Starting the hike with 20, then 28 and 25 miles per day in a blistering heat was not the best idea and that pace definitely wasn’t sustainable. At least not at first. Choosing black shoes wasn’t helping either as this color absorbes all wavelengths accumulating heat, which caused my feet to swell even more than expected. But there was another factor that put the final nail in the coffin and I had nothing to do with it. Just take a look at the pictures below. 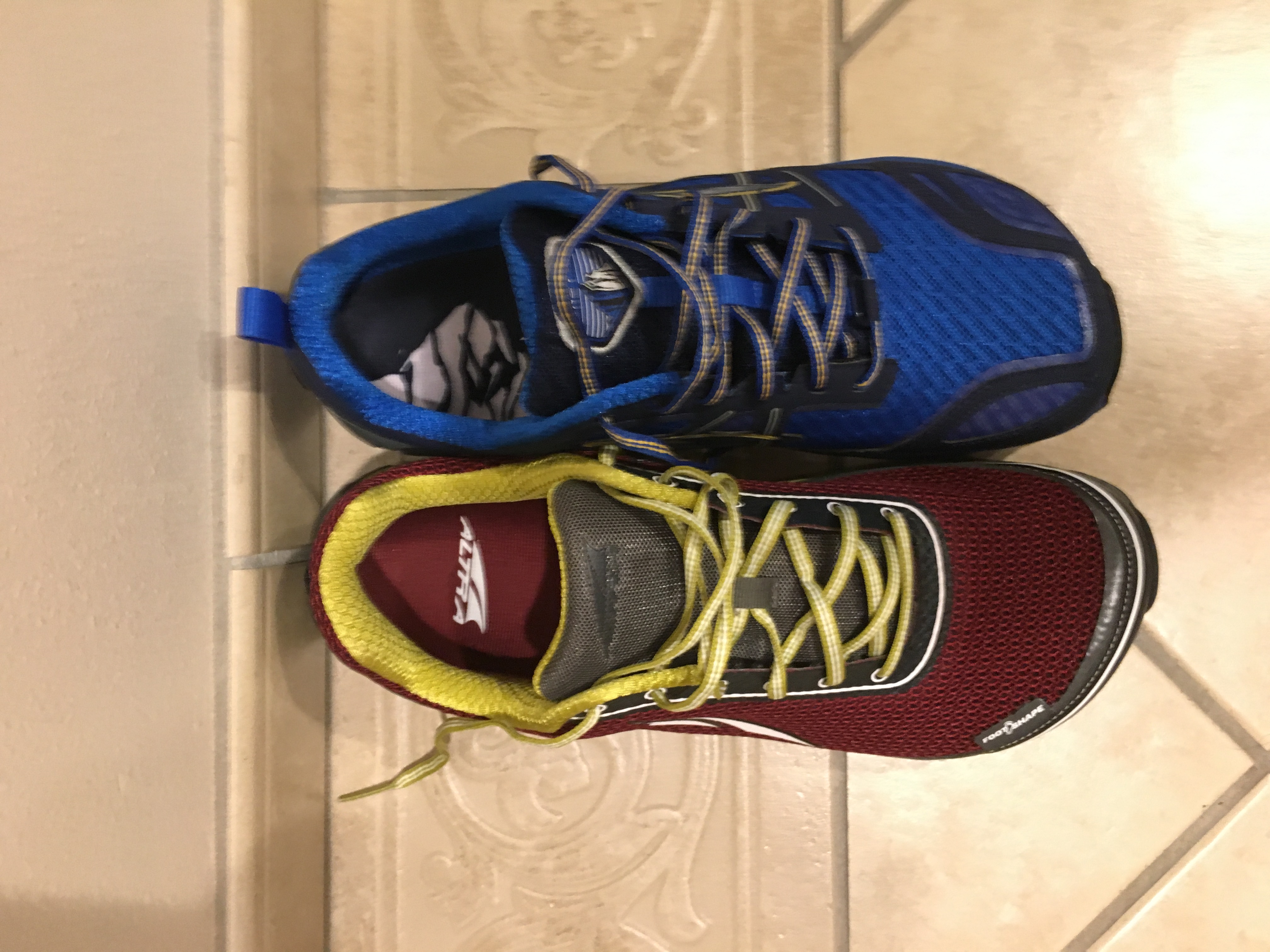 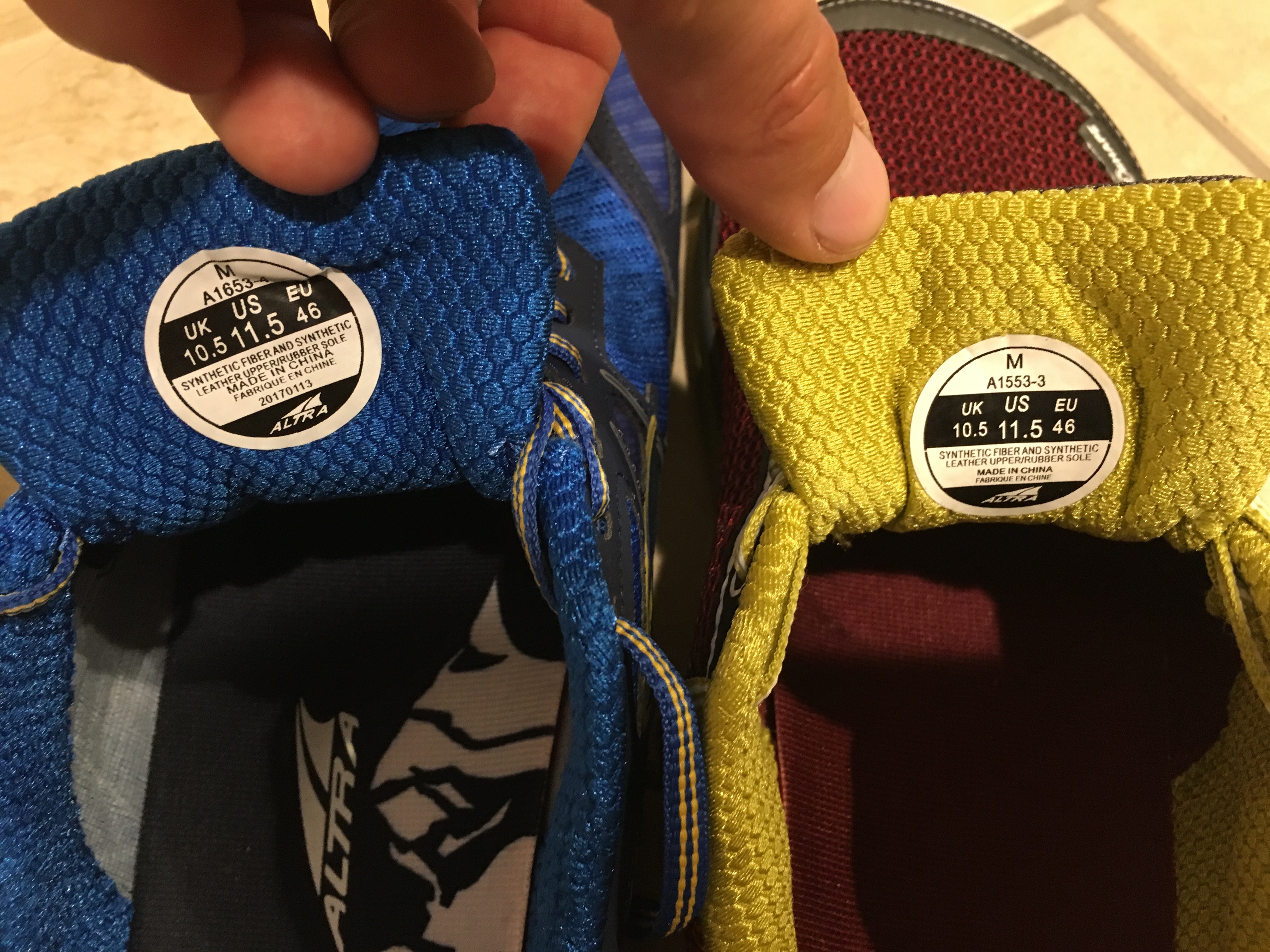 I generally wear size 10 so 11 seemed like a fair amount of extra room in the shoes. But after weeks of hiking with all this extra weight on my back in all this heat, I started running out of space for my toes (that’s why in the pictures you see shoes size 11.5). If that wasn’t enough, some companies seem to be a little creative with their shoe sizes and it may happen that a newer version of the same model can, in fact, be half a size smaller.

As a result of all these unfortunate decisions and turns of events, I ended up having to push through a stretch of desert with pretty bad blisters in very vulnerable and crucial parts of my feet. Well, that didn’t help the situation, as you may imagine and by the time I got to the nearest town, my blisters were pretty badly infected and stunk of spoiled meat. 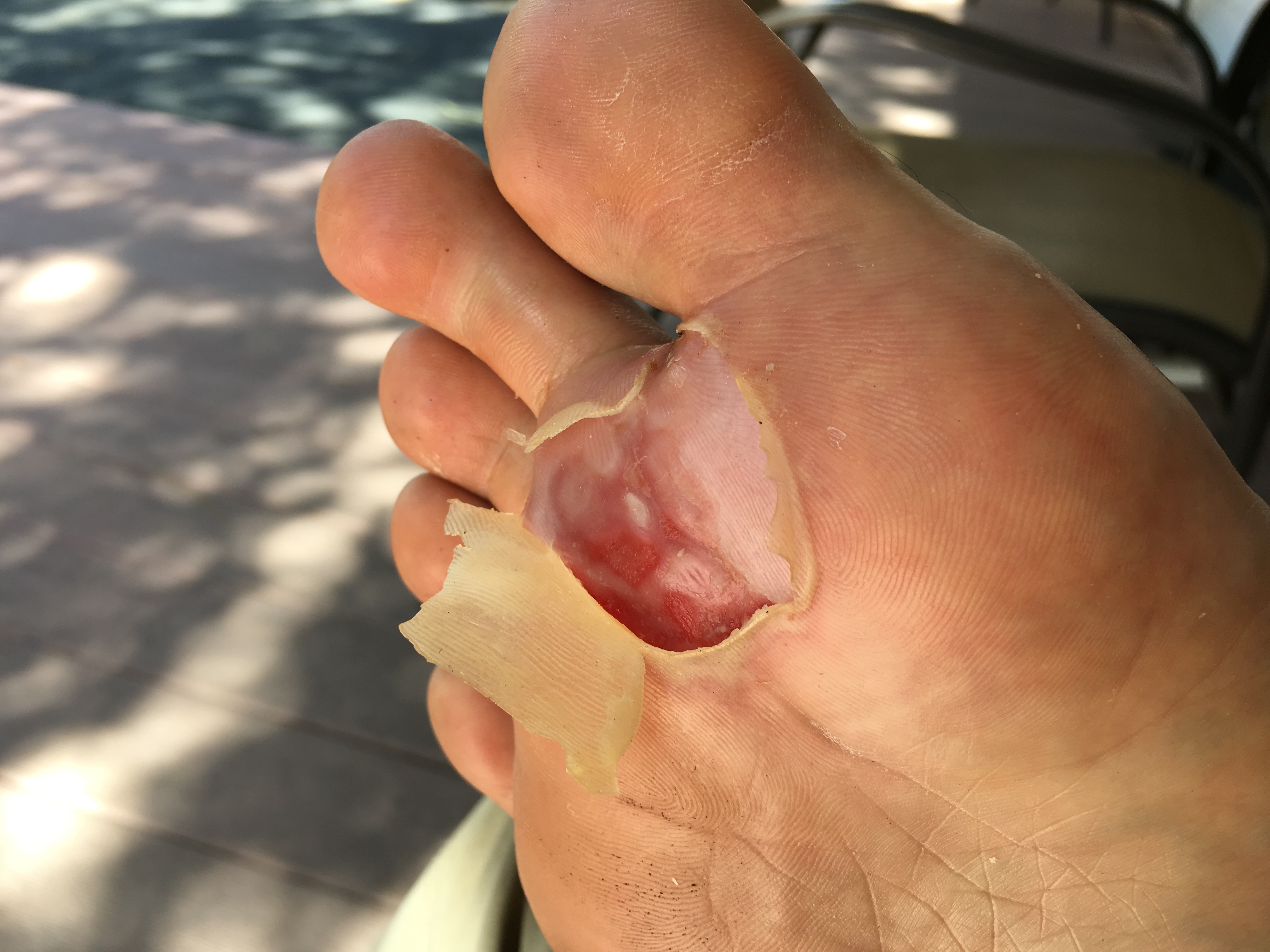 My hands were shaking when I first looked at the aftermath of five-day hiking on infected blisters. I had never seen or smelled anything like this before! The impression was only magnified by the fact that this was my own body and I was far from anybody who could help or advice me. I thought the trip was over for me but I gave myself one night to see which way the situation was going to lean and decide accordingly. I cut open the parts of blisters that weren’t already popped from pressure, drained and cleaned them with alcohol prep pads. 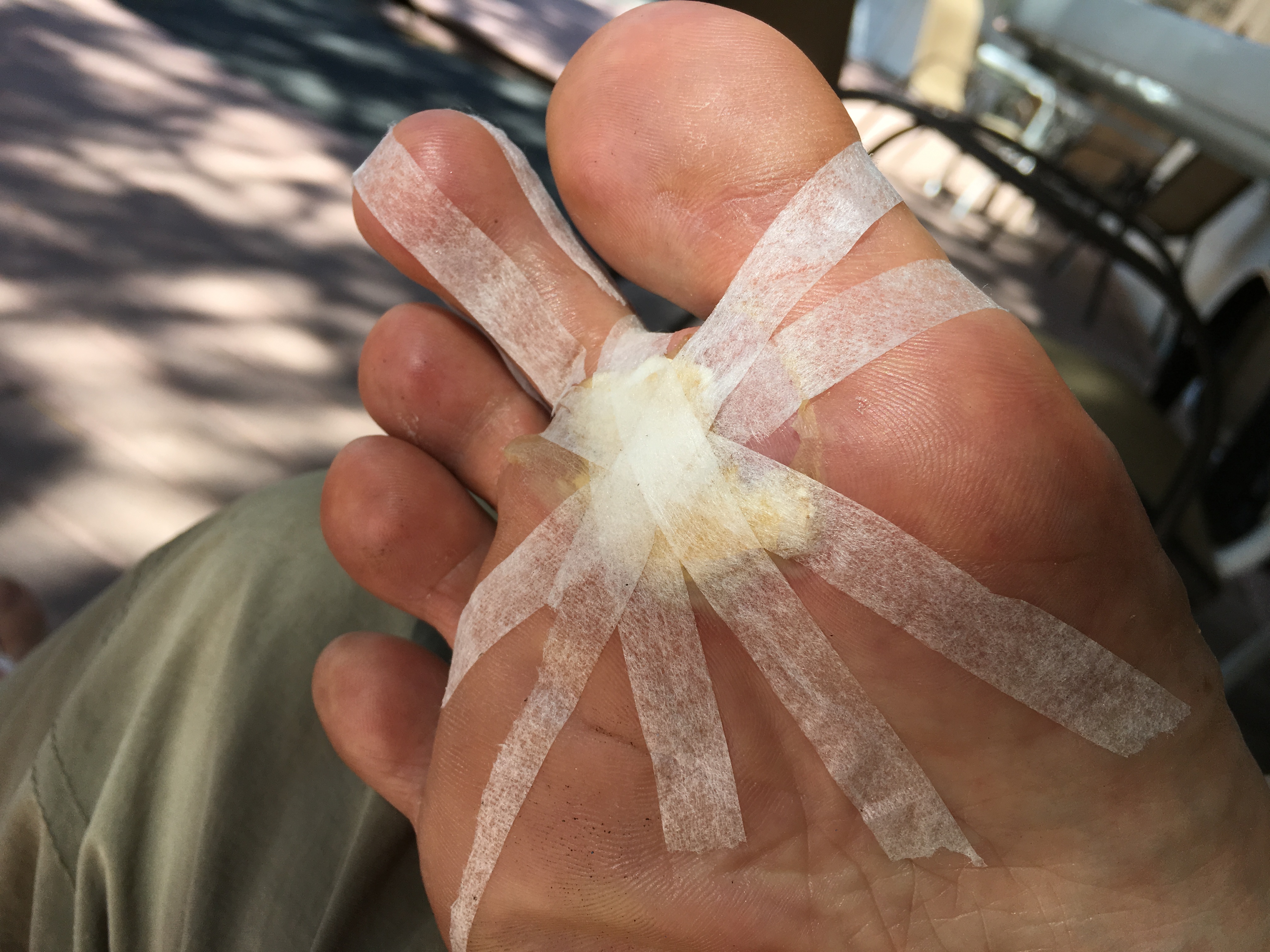 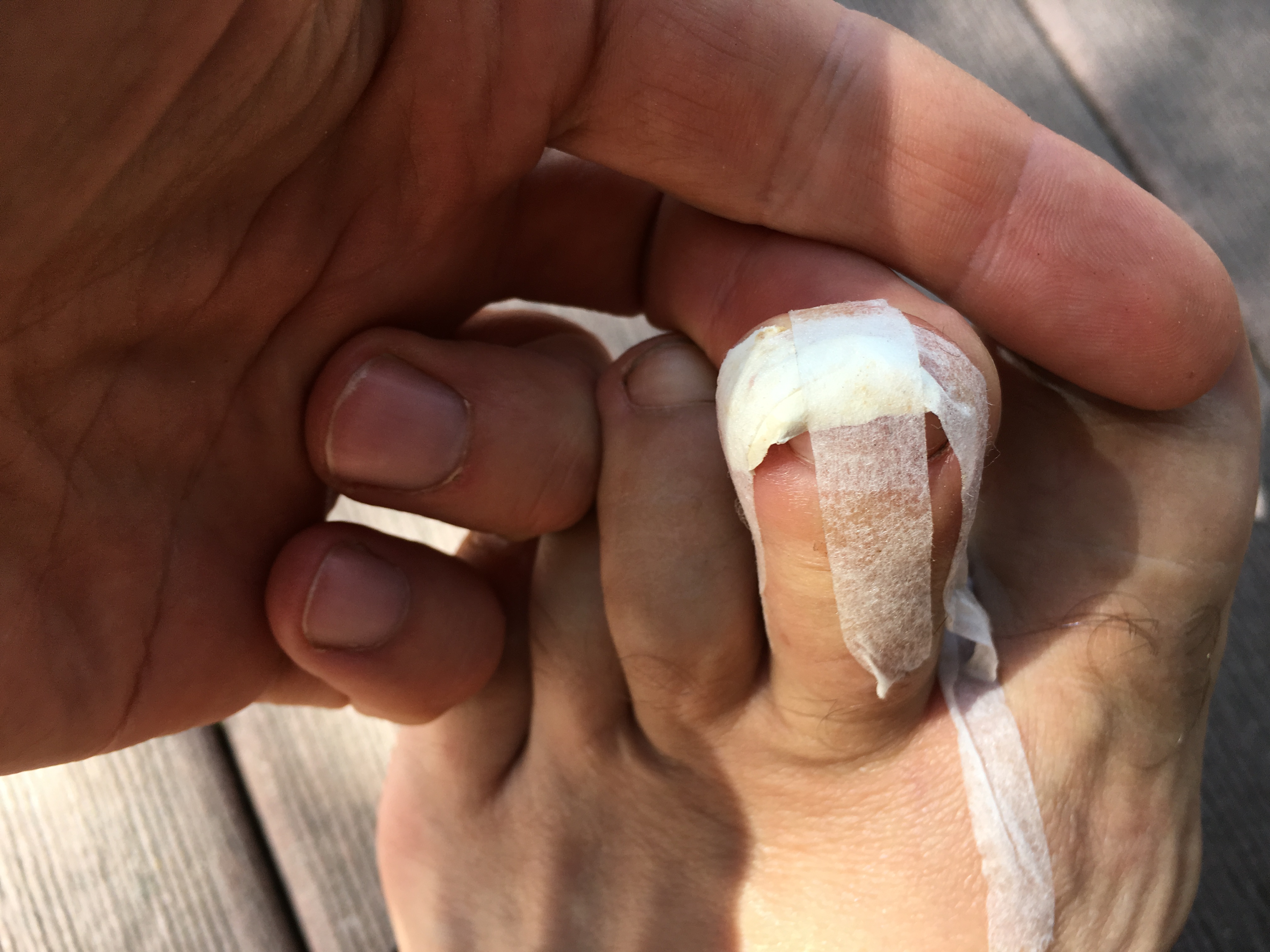 Since I couldn’t walk, I had to use whatever I had in my first aid kit. And there wasn’t much for such occasions. I did, however, have large pieces of birch polypore that I had successfully used to treat several badly looking wounds. Like many times before, the fungus did not disappoint. I took a quick look at my feet the next morning, and I knew I was gonna be fine. 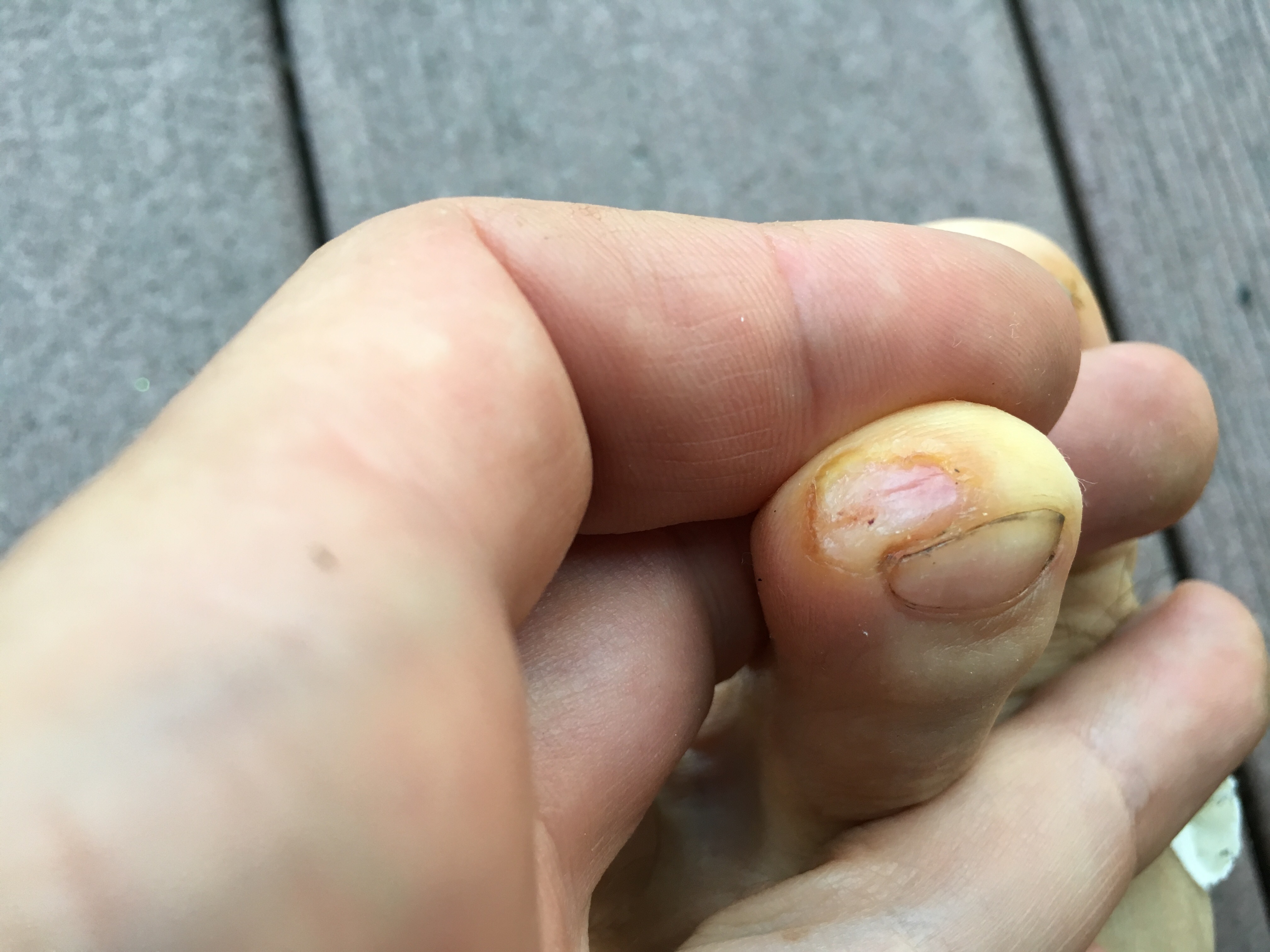 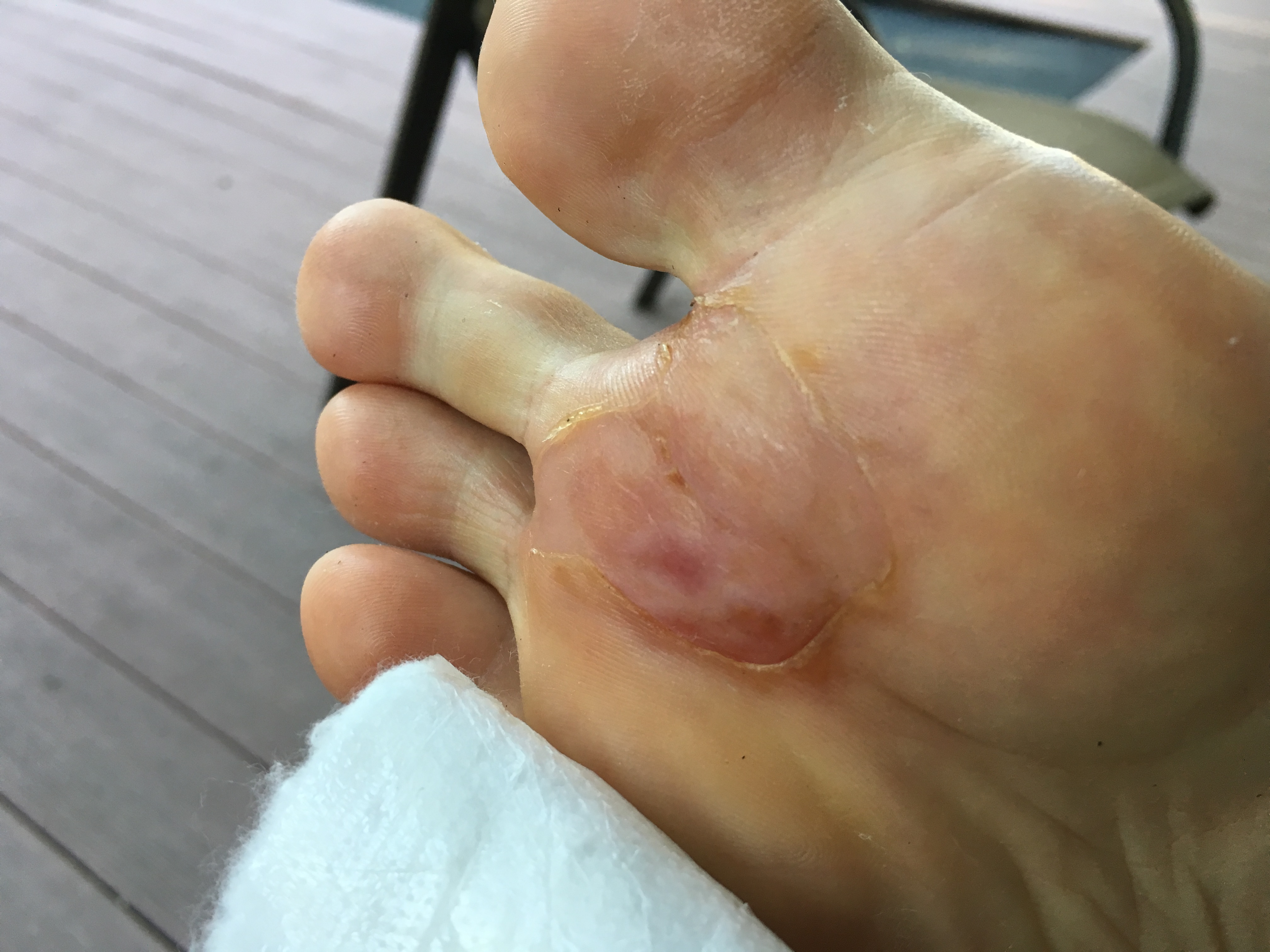 Honestly, I don’t know what it is about the birch polypore but it works every time. Even when it looks like hospital is my only option. When I was finally able to walk again, I gathered some serious medical supply from the local pharmacy and decided to act as soon as first symptoms would appear instead of trying to walk it off. You can ignore blisters and small wounds if you know you’re going home in a couple of days. But if you wanna stay in business for over four months… well, that’s a different story.

I still get occasional blisters as my shoes wear down with the cushion getting compressed and even collapsing in places. Unfortunately, I can only change my shoes in towns and not all of them have proper well stocked stores. To get a new pair in a resupply box, I’d have to predict a problem at least a week ahead. All this means that sometimes I have to hike dozens of miles in broken shoes, which are trying to scrape my skin off with every step.

Luckily, I’ve learned so much about foot care over the past few weeks, and have gathered plenty of useful balms and ointments such as ‘new skin’ or triple antibiotic ointment or a simple foot lubricant which prevents excessive rubbing, that I usually able to contain most problems before they spin out of control. I also learned several new tricks such as applying antiperspirant deodorant to my feet, which prevents excessive feet sweating, which in turn prevents dust from accumulating on my feet and reduces friction.

Other important and simple tricks include something as basic as taking my shoes and socks off during longer breaks and drying them in the sun. Dry skin is stronger than that mushy stuff it turns into after hours of hiking in moist, sweaty socks.

And last but definitely not least – personal hygiene. It’s extremely difficult in arid areas where we are often forced to dry-camp for days on end after sweating like horses every day in the same dirty clothes. But it’s also extremely important when it comes to preventing infections. I would know. I’ve already messed up and learned it the hard way. Maybe that’s why I now carry baby wipes in case there is no water in camp (drinking water is and always should be your priority). That also must be the main reason my trail name is Mr. Clean 🙂